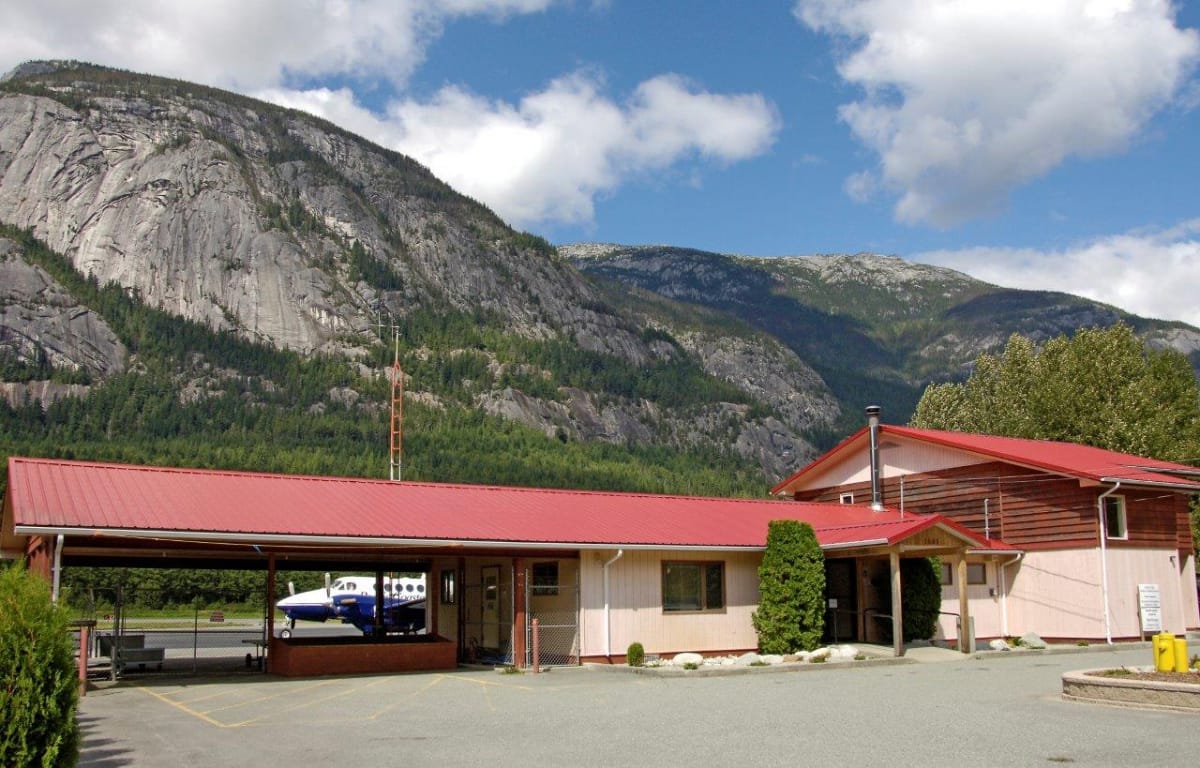 History of the Bella Coola Airport.

Supplementary Letters Patent #2 was issued by the Province of BC to CCRD (then Ocean Falls Regional District) in 1972 for the purposes of an airport and facilities in electoral areas C and D.  At that time, the volunteer Bella Coola Airport Commission was an active participant in the general operations at the airport.

The Bella Coola Airport currently has two designated taxiways. The taxiway data is shown below.

Both taxiways have a painted centre line and hold/stay lines. These are marked near the runway side of the taxiway.

There is one main apron at the Bella Coola Airport located in the air terminal building area. The apron area is over 85,000 square feet. The apron surface is asphalt and has appropriate paint markings.

Aircraft refuelling takes place on the apron. A yellow fuel tank facility is located between the air terminal building and the adjacent large white hangar. Pacific Coastal Airlines operates the Jet A-1 turbo fuel tank and CCRD operates the 100 LL gasoline tank as independent dealers. These designs meet the fire marshall´s requirement for distance from buildings and the apron, as well as environmental requirements. A 45 metre (150´) fuel hose allows refuelling to virtually all areas of the apron. West Coast Helicopters has a 45,000 litre Jet A-1 enviro-tank and Bella Coola Air has a 9000 litre 100 LL enviro-tank both with metered heads located near their own hangars to the west of the main terminal building site.

There is no existing air navigation system at the Bella Coola Airport. All flights are conducted under Visual Flight Rules (VFR) conditions. The surrounding mountainous terrain does not permit the use of electronic instrument navigation and landing aids. It also precludes airport lighting for night operations. There are visual landing aids, however, to assist VFR flights.

There is no Flight Services Station (FSS) at the Bella Coola Airport to provide flight services to civil aviation. There is a Remote Control Outlet (RCO) which relays radio communication information via VHF 126.7 MHz to the Kamloops FSS. The NAV Canada owned-and-operated RCO unit is located to the north of the meteorological compound. It has a 20 ft high antenna which has a hazard light attached. In addition to the radio communication link, there is a toll free telephone number to contact the Kamloops FSS to file flight plans with Transport Canada. A local aerodrome traffic frequency (ATF) - 122.8 MHz - is used to ensure radio-equipped aircraft operating on the ground or within an area of 5 nautical miles up to 3115 feet ASL are listening to a common frequency. The aircraft must also follow a common reporting procedure.

The Bella Coola Airport Operations Manual is prepared as a condition of certification with the federal Minister of Transport and forms an integral part of the aerodrome certificate. The certificate is issued under authority of the Aeronautics Act and authorizes the Central Coast Regional District to operate the airport. The manual specifies the standards that are met and the services that are provided by the Bella Coola Airport.

NOTAMs (Notice to Air Men) are issued in accordance with Transport Canada´s Canadian NOTAM Procedures Manual. They contain information about changes to facilities, services, procedure, hazards, etc., and of which timely knowledge is essential to personnel concerned with flight operations. NOTAM distribution is through the Transport Canada data network to provide current information to flight crews. Transport Canada´s Flight Service Stations are the focal points for issuing NOTAMs, using standardized format and language.

Bella Coola Airport Operations can be contacted at the Central Coast Regional District office 250-799-5291 or by emailing info@ccrd-bc.ca